She hadn’t been to Joshua Tree Oasis Lodging forever or so it seemed. But, leaving the blistering heat of Sacramento there she was at the edge of the Mojave Desert watching an army of giant black ants lug boulders of bread crumbs from crust to tunnel within insectonds. Those were some amazing ants—and cheering their super-spectacular feats from above were two generations of appreciative fans—Nana and her three-and-a-half year old grandson, Kaio. Long forgotten was the swelter of Northern California.

Joshua Tree Oasis Lodging was the coolest hot place in the world. Literally. After moments of “let’s get out of the sun,” you can instantly retreat into a relaxed clump inside the luxuriously icy-cool lodging where swirling fans, swamp coolers and humming AC’s offer you the best of both worlds.

The chance to slump into the comfort of cool-down naps or ice-capped drinks or hours of splash and spray-play in the generous outdoor cowboy spa or kick-back margarita-ville in the wildly bubbling Jacuzzi for eight. So many cool options. So much fun. 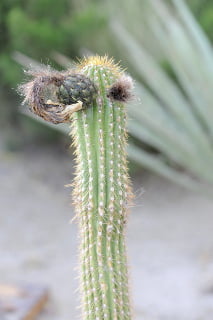 “Look, Kaio! The red ants took over the black ants’ territory!” They followed the new path to discover where the black ants escaped from the fierce invaders. A miniature desert war had transpired and all the grandma and grandson knew was that they were on a major bug hunt to watch and listen and point—never aware of the frantic pantimonium in deep down tunnels far beneath their toes.

Grandson and Nana were out to see the world in brief increments of hot and cold. Look! A lizard! Wow. A coyote in the distance! Let’s climb. Let’s roar this little sand truck down the path and see how fast it goes around that cactus that looks just like “Beeker” on the Muppets. Let’s read a bunch of books in the hammock together. Let’s lie on the cool tiles inside and watch TV and eat cold watermelon slices. Let’s stand on that big huge rock that looks like an alligator and disappear and appear again. Let’s play hide ‘n seek. Let’s go all the way to Mars and back.

You can do that at Joshua Tree Oasis and much, much more. And once the little one is tucked into his bed with the swirling sounds of the desert winds lullabye-ing him to sleep you can sway under the stars with your love at last in a where-have-you-been-all-my-life embrace and watch the play of dancing bats way up high moving to the music of the silky, sensual desert breath breathing in and out…in and out. Good night, coyotes…Good night, stars…Good night, ballet bats…Good night, Mars. Good night, shiny black ants and red ones so fiery blazing. Good night, beautiful Joshua Tree Oasis. You are amazing…